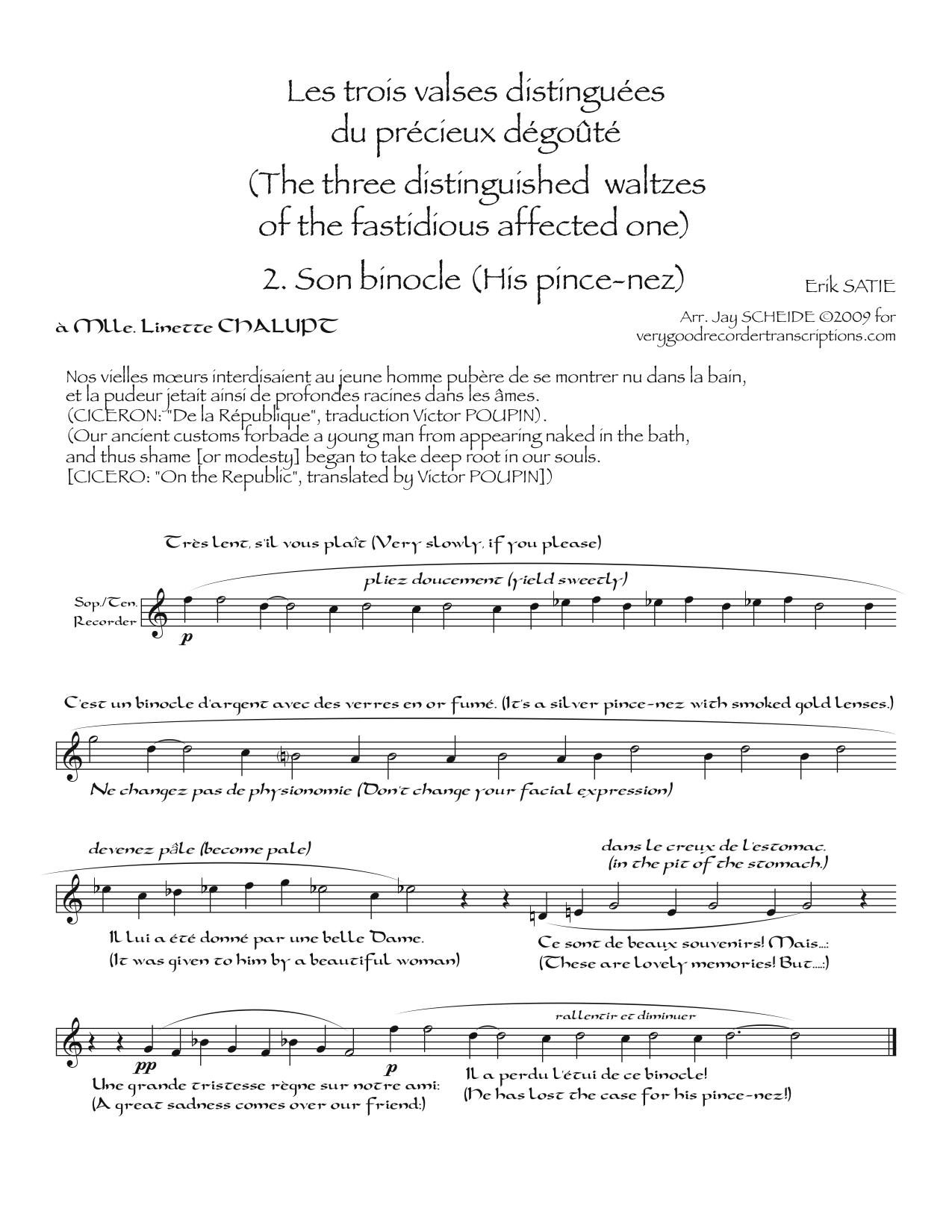 Easy solos for soprano or tenor recorder, consisting of: 1. The recorder solo part for “Son Binocle” from Satie’s piano music, lifted from our arrangement for recorder and keyboard. 2. “Petit Prélude de la Journée” by Satie, featured by itself in the solos section. 3. An arrangement from the penultimate movement, “En Plus,” from Three Pieces in the Form of a Pear, also by Satie. 4. An anonymous set including “Winter’s Return,” “Tanz,” “A Virgen Mui Groriosa,” taken from our large set, “24 Duets from Mediæval to Mahler.” 5. A pairing of the tune from the virelai by Machaut, Douce dame jolie and the Renaissance dance “Schiarazula Marazzula” which is found in a duet version in the “24 Duets.” 6. A group of nine English Country Dances: Hunt the Squirrel, Jack’s Maggot, Greensleeves and Yellow Lace, A Trip to Paris, Goddesses, Parsons Farewell, Never Love Thee More, Hunsdon House, and Daphne, some of which can be found in our duet sets. 7. Excerpts from three Mahler songs: a shortened adaptation of the vocal part from the song “Rheinlegendchen,” one from the end section of “In diesem Wetter,” the last of the Kindertotenlieder, and a much shortened and edited version of “Von Schönheit” from Das Lied von der Erde. 8. An étude for the lower middle chromatic range of the soprano or tenor recorder by composer/arranger Jay Scheide.
These are followed by some duets for soprano & alto, beginning with arrangements of keyboard music by Handel and Purcell that once again appear as part of the “24 Duets”, and a “Benedictus” by Lassus that (in altered form) appeared on Simon and Garfunkel’s first album. We end where we began with the master of doing a lot with a little and composing great music that is so often not overly difficult, Satie: duets made from the three piano pieces comprising Menus propos enfantins, also found separately on the website. Revised Jan. 5, 2020.